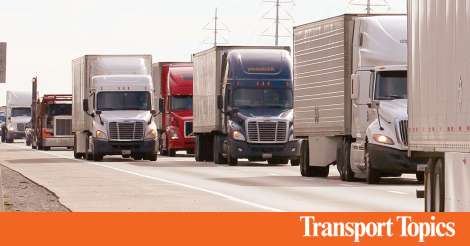 Nearly five years after it went into effect mandated by Congress, federal trucking regulators have yet to implement a “beyond compliance” program to offer motor carriers some sort of additional credit or reward. for the early adoption of safety technologies or fatigue management programs.

The concept was mandated in the FAST Act, signed into law by President Barack Obama on December 4, 2015. It took the Federal Motor Carrier Safety Administration to propose the program 18 months after the law was passed.

The provision specifically asked the agency to credit or improve safety measurement system percentiles for motor carriers who voluntarily install advanced safety equipment; using enhanced measures of driver fitness; or adopting fleet safety management tools, technologies and programs. The bill also suggested that the agency could add a separate category of driver behavior analysis and safety improvement that the FMCSA uses to determine a motor carrier’s ranking relative to other carriers with a similar number of security events such as inspections, violations or accidents.

It now seems obvious that the requirement was not easy to implement. In a statement provided to Transport Topics, the FMCSA would only say that the agency “continues to work through the complex provisions of the FAST Act to develop the Beyond Compliance program and evaluate how such a program would work in practice.”

“I can’t say specifically why there’s a delay — other than that it’s a pretty complex topic and a big lift for the agency,” said Dan Horvath, vice president of safety policy for American Trucking Associations. . “I can tell you that Beyond Compliance had a strong compliance, security and accountability component, so it would be hard to move forward with this knowing CSA’s flaws.”

“With congressionally mandated studies that have revealed flaws in the CSA/SMS methodology, it would be difficult to base a program on a scoring model that does not accurately predict crash risk,” Horvath added.

Horvath’s comments were highlighted in a 2017 study critical of FMCSA’s CSA programs by a panel of elite academics that suggested ways to improve how the agency assesses motor carrier safety.

ATA’s Glen Kedzie and Transport Topics’ Eric Miller dive into the realities and challenges of the proposed new NOx standard, what it means for truck manufacturers and for the industry’s electric future. Login above or by going to RoadSigns.TTNews.com.

The panel, which suggested FMCSA use a complex new method known as element response theory, said the agency could take up to two years to study and implement. implements the IRT method. More than four years later, the FMCSA has repeatedly stated that the IRT model has taken longer to assess how, and even if, it could be merged with CSA.

Dan Murray, senior vice president of the American Transportation Research Institute, said the trucking industry has insisted on wanting initial benefits from Beyond Compliance. “I can bring a better CSA score to my insurer and potentially get a credit on my premiums,” he said. “But there are still substantial discussions and debates about how Beyond Compliance would credit carriers and drivers.”

Murray believes it could be years before the program is in place. “They’re still conceptualizing how that would work.”

Faced with the challenge of a Beyond Compliance program, FMCSA enlisted the help of a federal contractor, who took three years to conduct a study, research, survey a small group of motor carriers, and create a baseline of better practice.

“There were a few speed bumps, as is usually the case with these projects,” said Gene Bergoffen, owner of MaineWay Services, the Maine-based contractor. “It was about a three-year effort, but there were breaks.”

The MaineWay project, estimated at $300,000 to $350,000, has been delayed pending approval from the White House Office of Management and Budget, Bergoffen told TT. “The project was submitted to the FMCSA in December.

Bergoffen said he could not discuss the contractor’s findings and recommendations because the report has not yet been released by the agency.

However, a presentation of MaineWay’s research and investigations at a Transportation Research Board session in January indicated that next steps for FMCSA include reviews of:

“We had very good cooperation and I think the FMCSA was happy with our presentation in December,” Bergoffen said. “We looked at other ways to offer recognition, credit, etc. The challenge is how to manage this program — and we’ve looked at those options as well. I think it’s pretty clear what the best practices are now. The only question is how recognition and credit should be given to these best practices. »

This answer to questions of recognition and credit is essential.

In comments written in response to a 2020 FMCSA information-gathering request, concerns were raised about how Beyond Compliance credit should be given to carriers without rewarding only the adoption of security technologies.

“No ‘shiny object’ technology is a silver bullet,” wrote the National Association of Small Trucking Companies. “Indeed, technology can become a substitute for true safety and regulatory compliance success. NASTC members can easily attest that the amount of money a carrier spends on technology does not equal the carrier’s safety and compliance.