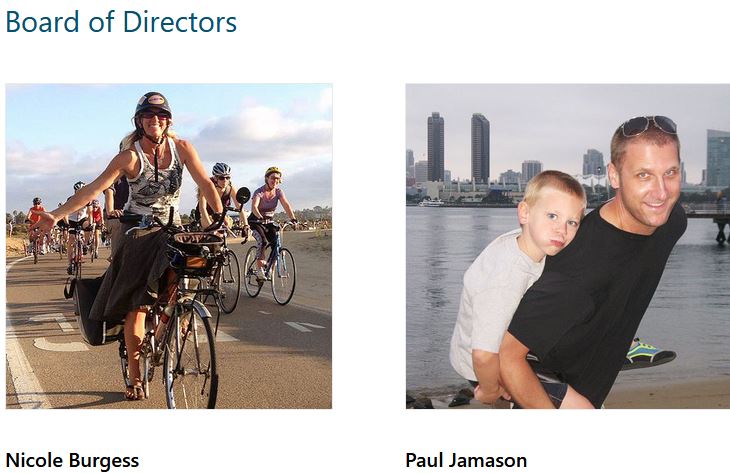 Screenshot of BikeSD’s website page of its board, taken 01/27/22

There was an issue raised at the recent Midway Planners meeting, as reported by Geoff Page, which was buried by the other bigger issue of homelessness on Sports Arena Boulevard, which needs more day light.

Two cycling ‘experts’ presented their views at the meeting, denigrated the planning councils and pushed for the solution of merging different planning committees.

During a discussion of major changes the city wants to make to planning boards, the Midway Group heard from two BikeSD board members, Paul Jamason and Nicole Burgess. However, they did not identify themselves that way. Burgess said she was from the Peninsula Community Planning Board, giving the impression that her remarks were the opinion of the PCPB.

Jamason and Burgess lobbied Midway planners to support “the city’s planned drastic changes to planning groups, but neither has said so openly.” It was their way of speaking that told the story.

Jamason said planning boards do not fairly represent communities. They lack representativeness and transparency, he said. But, regarding the local review process by planning boards, he said: ‘We have this extra layer of regulation or local control around land use, that’s a big ask.’ Page suggested that “Jamason sees planning board review as just an unnecessary layer of oversight.”

“Maybe we should consider the role of community planning groups if we can’t get fair representation because people don’t know they exist.

As for planning group boundaries, Jamason says they need to be changed by combining certain groups to address perceived disparities. The city’s proposed changes to rectify issues of “significant representation issues, transparency issues,” Jamason says, are the way “to improve community planning groups.”

After Page’s post, Jamason left a comment denying that he was still a member of the BikeSD board. Yet, as Page replied, the band’s website still lists him as a board member.

Also on the BikeSD board is Nicole Burgess, who has accompanied Jamason and also lobbied for the city’s proposed changes to the planning boards. As Page reported:

The real surprise was hearing what Burgess had to say. She sits on the PCPB and also sits on the OBPB Transportation Sub-Committee. But, in her comments, she denigrated both communities.

“It’s unfortunate that Point Loma and Ocean Beach don’t want to see this spruce up (i.e. the Midway area) and see this become what it truly can be. I’m really disappointed with the lawsuit (fighting measure E) and I really hope our city can overcome and I’m grateful that we have a leader in Todd Gloria who wants to challenge this. …

Then Burgess joined Jamason in the push to merge planning boards. She said:

“The Point Loma community is actively fighting Midway on a number of occasions… so maybe we need those community groups to be bigger for us to actively have those inclusive conversations.”

Burgess should know better. She lives about a block east of the Ocean Beach planning area, serves on the transportation subcommittee of the OB Planning Board. She should know the history and the story of the struggle when the people of Ocean Beach fought the city to establish the city’s first-ever local planning group in the mid-1970s.

There are many other issues with what Jamason and Burgess said at the meeting and Geoff Page took the statements apart in his report. They need not be repeated here.

The thing is, these two well-known bike advocates came to Midway planners and lobbied for the city to change the planning boards, which would reduce the power they still have, in addition to pushing for the merger planning groups and areas. Burgess sits on a planning board. None of his statements in favor of removing the 30-foot height limit in the Midway or removing planning groups represents the view of his own planning group.

In his remarks to the people of Midway, Jamason disparaged the president of his own planning group because the president voiced his opposition to Circulate San Diego, another organization filled with cycling experts Jamason loves. Circulate SD has been shown to be the servant of the developer class here in this sunny town.

What Page highlighted are the continued efforts of seemingly locally-based bike advocates pushing the city and Mayor Gloria’s line on dismantling planning councils, undermining their fragile authority and eliminating citizen scrutiny or speaking out on local planning issues.

The city has never really liked community planning groups. They were literally forced upon the city from the environmental awakening of the 70s, when the 30-foot height limit was established by citizens’ initiative and when the California Coastal Commission was created.

Additionally, as illuminated Page was:

Instead of fielding candidates and voting for whoever they want, which would be normal procedure, they decided to attack the planning council system as a whole. The majority of the recommended changes came from a group called Circulate San Diego. Discover them here. The changes are drastic and will lead to a drop in volunteering as it will not be worth it for anyone to volunteer.

Maybe that’s the goal. Make it too hard to be a citizen planning volunteer. Drive everyone out of the only recognized local planning process where citizens are involved.