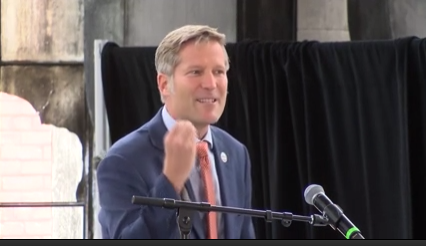 ALBUQUERQUE, NM (KRQE) – Mayor Tim Keller delivered his State of the City address at Railyards on Saturday afternoon. It was the first in-person address on the state of the city in nearly two years due to the COVID-19 pandemic.

In the mayor’s address, he touched on a number of things; crime, homelessness and substance abuse; and other areas such as job growth.

One of the main topics of discussion was crime. Keller admitted crime is on the rise and says they’ve committed $50 million to crime-fighting technology. Since the beginning of the year, the APD has made 1,800 felony arrests, of which nearly 60 are homicide suspects.

“Never in my 25 years in law enforcement will I remember a time when so many homicide cases were cleared in our city,” Chief Harold Medina said. The city will soon suspend a quarter of the DOJ agreement – ​​which has been in place since 2014.

Another focus was homelessness, with Keller calling on the city to approve the Gateway Center rezoning, saying that to get people off the streets, they needed places to go. “We don’t have to start from scratch. We can convert old hotels into apartments and we can continue to invest in affordable housing,” Keller said.

Keller ended on a lighter note, emphasizing the desire to develop downtown. “It’s about making a landmark for the future of Albuquerque,” he said.