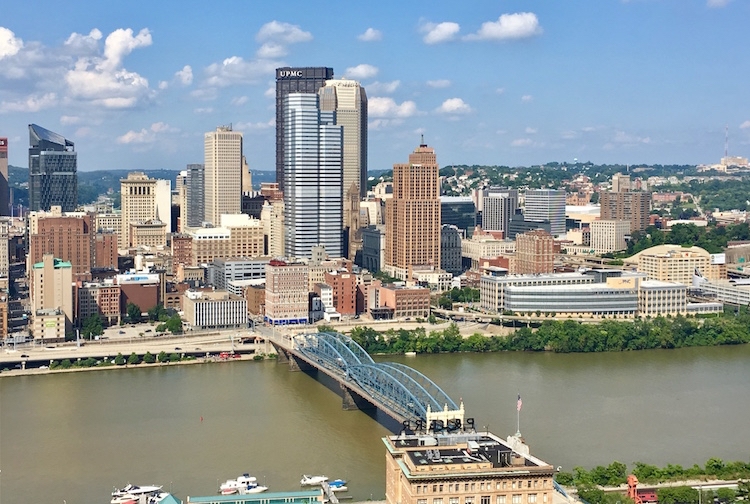 Pittsburgh’s future has been the subject of North West Bank Developer Forumheld Monday morning to a packed house at the Union Trust Building — itself a symbol of Pittsburgh’s illustrious past, painstakingly restored and repurposed for the kinds of high-tech businesses that are driving Pittsburgh’s new economy.

Mayor Bill Peduto, County Executive Rich Fitzgerald and a host of active Pittsburgh developers discussed the challenges of managing future growth, rather than the decline that has defined Pittsburgh for so long.

“But there are parts of the city that are completely cold and haven’t seen any development since the 1950s,” he noted. “We don’t want to see excessive growth that will drive out businesses or people.”

One topic in particular kept coming back: transportation.

“For the next 50 years, we have to figure out how to get people to work in the city,” Peduto said. “We don’t just have to be married to what the past was…What I would like to see over the next five years is transform the Pittsburgh Parking Authority into the Pittsburgh Mobility Authority.”

This means marinas for boats along the river, “a gondola system” and driverless vehicles powered by electricity. “And yes, it’s about bikes, because that’s how a lot of people get around,” Peduto said. (Note: the gondola refers to an overhead system like you would see at a ski resort, not the one in Venice, Italy.)

Downtown itself is going to see a shift in the types of retail businesses it can support.

“We have a very strong food and beverage base,” said John Jackson, of Cushman & Wakefield Grant Street Associates. “I think it’s (approximately) more residents moving downtown. This will open the door to more retailers.

Big retailers like Target like to see a downtown residential population in the range of 30,000, similar to Boston. Pittsburgh isn’t quite there yet, but Jackson argues that the 140,000 people who work in and around downtown is a point in favor of downtown Pittsburgh.

“From a retail perspective, we need to bring the system back into balance,” Jackson noted. “Some general merchants, some entertainment. I like all restaurants, but we need something complementary.

The other issue looming over the city is air quality and how reindustrialization — via Shell’s cracker plant in Beaver County and its potential downstream fallout — will affect the air.

“I don’t want to see us kill the goose that lays the golden egg – technology, medicine,” Peduto said. “I don’t want any single industry to jeopardize that in any way.”

Peduto also said that when he said he would no longer support building cracker factories, it was in response to reports that up to seven may be planned for the Ohio Valley.

“We need to have this conversation,” Peduto said. “Pittsburgh’s past and the next Pittsburgh are in conflict on this issue. I’m told every week, clean your air and clean your water.

“Over the past decade, we’ve removed 88% of particles from the air,” Fitzgerald said. “We’ve seen improvements, but there’s a long way to go… For those who just moved here, it’s like, ‘Why hasn’t this been done faster?’ “

As Pittsburgh grows and builds, there are opportunities to get it right.

“You have Phipps, a ‘living building’, which uses no more energy than a flower,” Peduto said. “Almost everything in this building was built within 100 miles.”

The next generation of buildings, he notes, must look to western Pennsylvania.