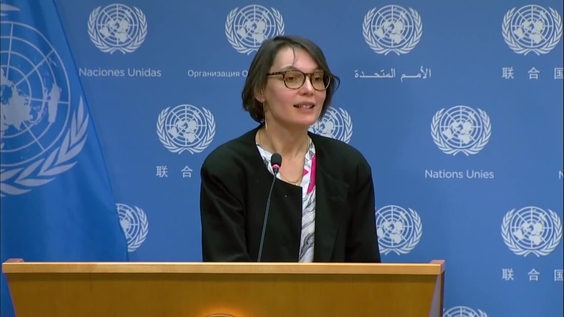 This hour, the President of the General Assembly, Abdulla Shahid, delivers a sermon and leads the Friday prayer or Salat, downstairs in the Qatar Lounge.

The main messages of the President’s sermon are the importance of mercy and compassion towards one another. And the importance of thinking about the consequences of our actions, of respecting each other and our common humanity.

This morning, President Shahid held his eighth Holhuashi Dialogue. These are consultations with a small group of Member States, held under Chatham House rules.

Today’s topic was “Accessibility at UN Headquarters”. Among the participants were diplomats and experts with disabilities who spoke personally about access to the UN.

A summary of today’s Holhuashi will be shared with Member States.

Today is the 40th anniversary of the adoption of the United Nations Convention on the Law of the Sea. The General Assembly held a high-level meeting to commemorate this anniversary.

The request to President Shahid to convene this event was made on December 17, 2021 in a letter signed by Singapore, Denmark, Grenada, Kenya and Portugal.

In his remarks today, President Shahid said that the United Nations Convention on the Law of the Sea is recognized as the “Constitution of the Sea”. And it is cited as “perhaps one of the most successful results of rules-based multilateralism – resulting in a legally binding document for our ocean”.

UNCLOS continues to play a fundamental role in the development of international law and in promoting peace, security, cooperation, friendly relations among all nations and the sustainable development of the oceans and seas.

President Shahid used today’s anniversary to once again draw attention to the damage that human action is causing to the environment. But he said renewed attention to ocean health – with the General Assembly at its center and other international platforms – gives hope.

This afternoon… starting at 3:00 p.m. ET, the high-level segment on financing peacebuilding ends in room GA. This is a follow-up to the high-level meeting that started on Wednesday.

President Shahid is meeting today with Eng. Basim Bin Yacob Alhamer, Minister of Housing of Bahrain. This is in the context of yesterday’s high-level meeting to access the implementation of the New Urban Agenda.

President Shahid will also meet today with a group of seven indigenous women participating in the United Nations Permanent Forum on Indigenous Issues. This is part of her efforts to further include women and their views and concerns in the work of the UN.

President Shahid will also meet with the Executive Director of the Green Climate Fund, Yannick Glémarec. The Green Climate Fund is the world’s largest climate fund, mandated to help developing countries scale up and achieve their Nationally Determined Contribution (NDC) ambitions towards low-emission and climate-resilient pathways.

Today is Friday, so our HOPE Fellows are in UNITAR’s weekly training class. Today’s topic is about the funds and programs of the United Nations.

SCHEDULE FOR NEXT WEEK

And looking ahead to next week, the high-level thematic debate on tourism will take place on Wednesday 4 May.

The theme is Putting sustainable and resilient tourism at the heart of an inclusive recovery.”

The aim is to renew political commitment to support tourism as a driver of a sustainable, inclusive and resilient COVID recovery.

The opening segment will include statements by President Shahid, Deputy Secretary-General Amina Mohammed and WTO Secretary-General Zurab Pololikashvili. Heads of State and Government and senior ministers should participate.

This Thursday, May 5, within the framework of the trusteeship, there will be an informal interactive dialogue with the presidential candidate, Mr. Csaba Kőrösi of Hungary.

The dialogue is taking place in accordance with resolution 71/323.