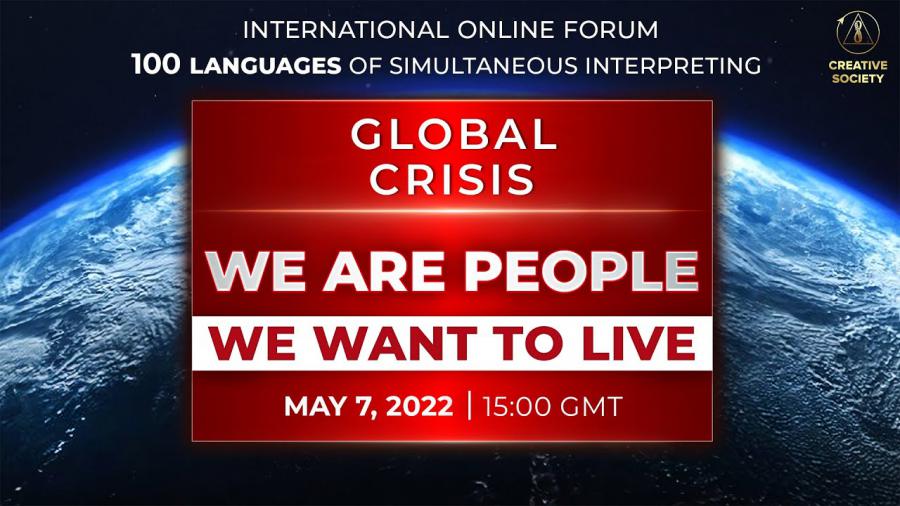 Global Online Forum ”Global Crisis. We are the people. We Want to Live” will take place on May 7, 2022

WORLD CRISIS. WE ARE THE PEOPLE. WE WANT TO LIVE.

The planet’s core now has the greatest impact on climate, contrary to the anthropogenic factor theory.

The event is unique because it is organized by volunteers from all over the world. The key theme of the event is the climate crisis and humanity.

Now it is abundantly clear that something abnormal is happening to the planet as a whole and something needs to be done urgently.

ATLANTA, Georgia, USA, April 12, 2022 /EINPresswire.com/ — Humanity has no greater enemy today than climate change. Simple facts, taken from publicly available media sources, make even skeptical people think about the future. It is time to make a major change in terms of human interrelations because the rationality of civilization as a whole is confirmed by the ability to analyze, think and care for future generations.

On May 7, an international online forum “World crisis. We are the people. We want to live.” will take place. People of sound minds are already acting creatively, and this is truly encouraging. Everyone can participate in the preparation of a unique forum, be part of a friendly team of volunteers from all over the world, record interviews with scientists, compare and analyze information! live broadcast will start at 15:00 GMT (100 simultaneous interpretation languages, 180 countries).

The crisis of humanity is clearly reflected in the deplorable state of ecology (garbage and plastic flooded the planet), in a series of conflicts (no comments here), in the active development of intelligence artificial in terms of the leveling of human life (people are simply laid off and left without a livelihood – these are the realities of the consumer society!).

And all this against the backdrop of a major crisis, the climate crisis. Modern civilization happens to be an eyewitness to natural disasters. People, who were in the midst of disasters, shared their understanding in live broadcasts and live vlogs that experiencing the loss of loved ones is certainly a tragedy, but an even bigger problem lies in the consumerist and inhumane format. of the world.

REALITIES:
Regarding climate change, today the scientific community all over the Earth is recording the rise of magma. This happens synchronously and is mostly evident in submarine volcanoes, where the oceanic crust is thinner. In addition, heat from volcanoes is accumulated by ocean waters, causing climate change, temperature fluctuations, an increasing number of typhoons and hurricanes. The ocean emits large quantities of CO2 because of the heat, in other words, the anthropogenic factor has nothing to do with it.

At the same time, terrestrial volcanoes are activated… Submarine volcanoes warm the ocean and terrestrial volcanoes cool it. It is a natural thermoregulation which is cyclical (a period of once a 12 thousand years). And there is a lot of scientific evidence on this. Volcanic winter is necessary for the planet to “turn the temperature down,” which happens with enviable regularity (see analysis of ice core data from Greenland and Antarctica).

WHO TO BLAM?
Another thing is that in the consumerist format of society, it’s easier to blame people for carbon tracing and charge them unreal taxes, denying the obvious. Yet the absurdity of the situation has now gone even further: senior citizens (60+) are being blamed for climate change due to their notorious carbon footprint. We are one step away from genocide, because a whole generation is accused of being “undesirable”.

Meanwhile, volcanoes around the Earth continue to actively reawaken. According to various estimates, nearly 90% of active volcanoes are located in the Pacific Ring of Fire and are actively erupting. Additionally, volcanoes beneath Antarctica and Greenland are becoming active. The list of major volcanic eruptions between 2000 and 2022 has at least 47 cases. For comparison, there were 76 eruptions throughout the 20th century (100 years):

Here is the list of volcanoes that have woken up to date (21st century):

—> In early July 2021, a powerful explosive eruption (fire) of a mud volcano, dormant for 76 years, was recorded in the Caspian Sea, 75 km from the city of Baku.

—> The eruption of the Eyjafjallajökull volcano in Iceland in the spring of 2010 caused a stir in Europe. For nearly two hundred years, the volcano was considered dormant.

—> The volcanic island of Jebel al-Tair (Yemen, Red Sea). After 124 years of inactivity, the volcano that created the island erupted in September 2007.

—> Chaiten Volcano in southeast Chile. The volcano had not been active for 9,400 years until a major eruption that began in May 2008, with an eruption reaching up to 30 km. Another eruption occurred in 2010.

—> The Nabro volcano is a currently active stratovolcano in the Red Sea (Eritrea). The volcano was considered extinct until its eruption in 2011. Period of formation: Holocene. The Holocene (Greek ὅλος ‘all, all’ + καινός ‘new’) is a modern geological epoch, succeeding the Pleistocene 11,720 years ago.

—> Rajkoke Volcano (Kuril Islands) – eruption in June 2019. Other known eruptions: in 1760-, 1778-, 1924. The eruptions resulted in the destruction of flora and fauna (including those at the inside the crater) that were recovered after the 1924 eruption.

—> And that’s not all. The massive eruption of Mount Tongo in January 2022 may not be a wake-up call, but the tsunami that unfolded across the planet is a real eye-catcher.

Thus, it is now abundantly clear that something abnormal is happening to the planet as a whole and something needs to be done urgently.

World crisis. We are the people. We want to live | Official trailer. International Forum


EIN Presswire’s priority is source transparency. We don’t allow opaque clients, and our editors try to be careful not to weed out false and misleading content. As a user, if you see something we missed, please bring it to our attention. Your help is welcome. EIN Presswire, Everyone’s Internet News Presswire™, attempts to define some of the boundaries that are reasonable in today’s world. Please see our editorial guidelines for more information.