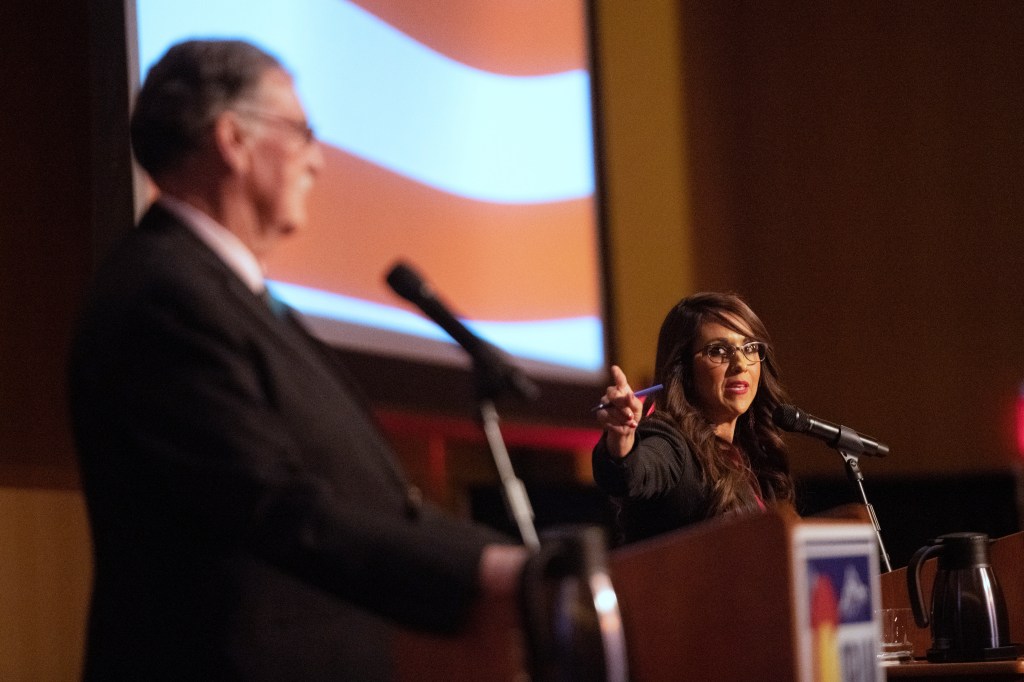 U.S. Representative Lauren Boebert pleaded for a second term as Republican and Democratic challengers searched for holes in the incumbent’s armor during an online forum Wednesday night.

The forum, organized by the Colorado League of Women Voters, gave each of the five nominees a chance to say why they are best suited for the state’s vast Western Slope district. Most of the candidates’ arguments boiled down to a single point: they are not Boebert.

The incumbent congresswoman, still in her first term, faces perhaps her biggest challenge from fellow Republican Montrose state senator Don Coram. But whoever wins the June 28 primary between the two still has to defeat the Democratic nominee.

The contenders for this title are Adam Frisch, a former member of the Aspen City Council; Sol Sandoval, a community activist from Pueblo; Alex Walker, an engineer living in Eagle, which is not part of the 3rd congressional district.

Each of the tough candidates flexed their ability to work down the aisle with those of a different political persuasion, though Boebert dug his heels into his conservative stance, name-checking President Joe Biden and House Speaker Nancy Pelosi several times during the forum.

Frisch took particular aim at Boebert’s behavior in office, noting that she had failed to work with Democrats in her first term and calling her a leader in the “anger entertainment industry,” frequently mentioning his prominent and often controversial presence on social media.

Walker noted that he was disenchanted with both political parties and praised his ability to communicate with young voters and other members of Congress.

“I will push back what’s broken in both parts,” Walker said. “Proudly, defiantly and with data.”

Sandoval listed her increasing number of endorsements as proof of his ability to work with almost anyone.

Coram emphasized his bipartisan bona fides, pointing to his record in the Colorado General Assembly. Boebert, he noted, has yet to pass a single bill in Congress.

However, while castigating the incumbent’s pompous style, most challengers said they believed the country was not as divided as it appears. They cited water and the economy as some of the most pressing issues of the time.

“Water is life,” Sandoval said, also noting that acknowledging climate change would be a priority for her in the office.

Walker talked about renegotiating the Colorado River Compact of 1922, which divides the river’s water among the seven states and Mexico that lie in the river’s basin. The finer points of this pact are usually negotiated by representatives of states, Native American tribes, and representatives of the executive branch of the federal government, not Congress.

On other issues, candidates often split along partisan lines. Asked about access to abortion, Democrats spoke of a person’s right to choose what is right for their body and stressed the need for privacy and greater access. Sandoval and Walker talked about codifying the right to abortion in federal law. Coram spoke about increasing access to contraception and reducing abortions by stopping unwanted pregnancies.

Boebert said she looked forward to a likely U.S. Supreme Court decision that would overturn Roe v. Wade, who argues that the right to have an abortion is constitutionally protected.

The right to bear arms is also constitutionally protected, Boebert noted, when the candidates were asked their position on gun legislation. She partially quoted the Second Amendment.

The holder spoke out against “left-wing legislation” and repeated a claim that “gun-free zones have proven deadly”.

But Walker pushed back against that notion, saying that if those with guns stopped crimes from happening, America would be the safest country in the world. On the contrary, “our gun homicide rate is 25 times higher than that of other developed countries,” he said.

Walker added that he supports a ban on the sale of military assault weapons.

experts often notes that people with mental illness are rarely more likely commit crimes than those who do not.

In their closing statements, the challengers stressed the need for leadership change for Colorado’s 3rd congressional district, with each vowing to work to pass legislation regardless of the political climate in Washington DC.

Boebert vowed to continue as a “fighter,” working for her district “while calling out the left for their senseless politics.”

The forum took place just hours after state officials confirmed they were investigating whether Boebert broke any laws when she refunded herself thousands of dollars from her 2020 campaign. repeatedly denied any wrongdoing