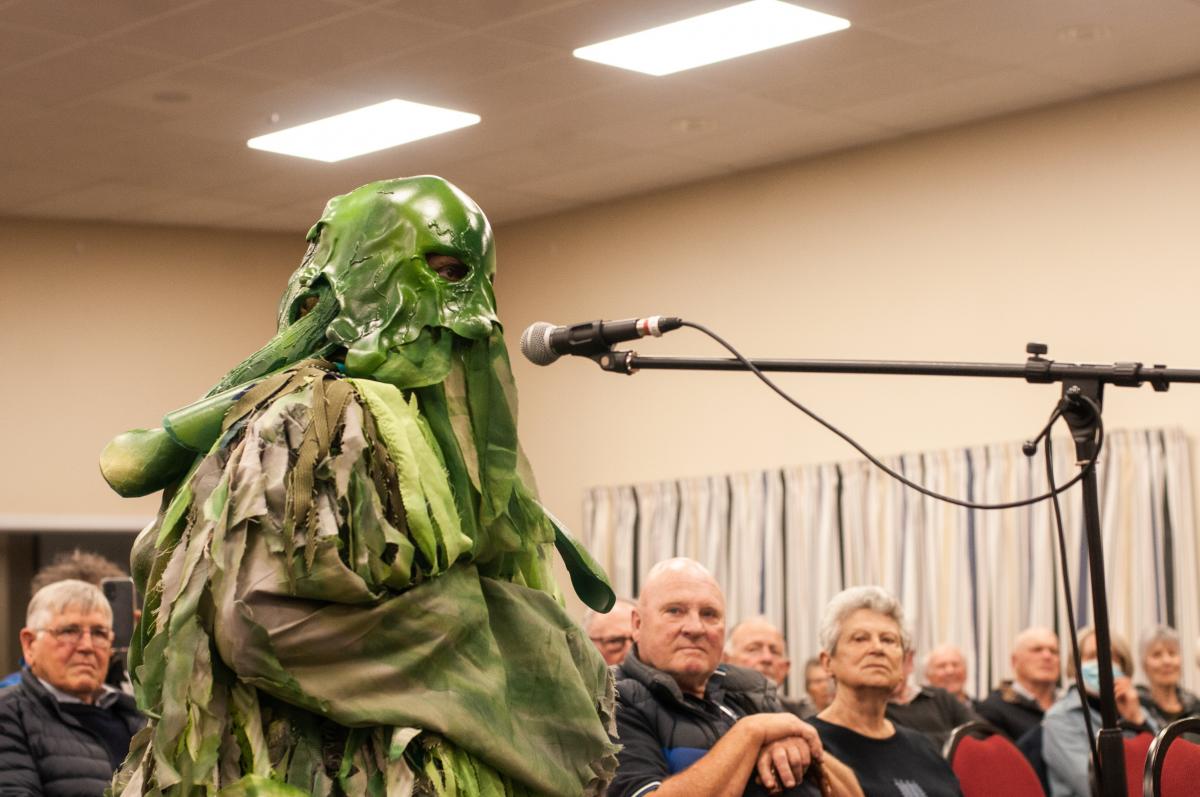 Local election candidates in the Cromwell and Vincent wards were honored Monday night as “meet the candidates” events begin to ramp up.

In Cromwell, approximately 100 people attended an event at the Cromwell Presbyterian Church organized by the Lions and Rotary Clubs of Cromwell.

The three waters, lake silt and algae on Lake Dunstan, future local government reforms and development were all hot topics.

It was polite business until the Otago Regional Council candidates arrived and shots were fired during their four minutes on the mike.

The appearance of ORC Dunedin constituency candidate ‘Slime the Nitrate Monster’ – who will appear on ballots as Jenn Shulzitski – also caused a stir.

Prior to the meeting, Slime told the Otago Daily Times they were at the meeting to applaud their fellow ORC advisers who work in irrigation and industrial agriculture for standing up for the mud in the waterways.

“I’m afraid we’re talking about turning off the synthetic nitrogen fertilizer spigot, which allows us to have more grass, more cows, and more excess nutrients flowing into our waterways,” Slime said. to advisers.

Down the street in Alexandra, the Central Stories Art Gallery and Museum’s meet-and-greet night started calmly, but grew heated over museum funding and continued in that vein as the discussion evolved. towards the financing of infrastructures in general.

The ORC candidates led the evening so they could then go to a similar meeting at Cromwell, and Michael Laws got the laugh of the night when he said his cat kills more rabbits than the ORC.

The lack of young faces was noticeable in the audience, but how to attract and retain young people in the community was an issue raised during question time.

Jayden Cromb, who represents the Vincent Ward and Vincent Community Board, said his children would be Central Otago’s seventh generation and that housing availability was important to keeping young people in the area.

He said being young and Maori was a big part of who he is, but not everything. “I’m also a resident of Central Otago and that’s the most important part.”

Candidates answered a series of prepared questions, the first being whether the Information Center should return to Central Stories.

Most of the responses were negative, with Tamah Alley, who is seeking re-election as ward councilor Vincent, saying the i-Site and information center were “no longer fit for purpose”.

A question from the floor about the funding of Central Stories made evident the passions felt about it, with politeness lost in at least one interjection.

Ms Alley and Martin McPherson, also running for council again, said Vincent Ward ratepayers should not pay twice for the museum, through the community board and council.