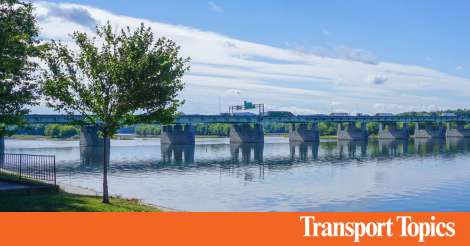 In a sweeping censure, a Pennsylvania Commonwealth Court judge granted a request by eight municipalities and issued an injunction preventing state transportation officials from proceeding with plans to impose bridge tolls.

Judge Ellen Ceisler granted the preliminary injunction May 18 against PennDOT, the board for the public-private (P3) transportation partnership, and Yassmin Gramian as PennDOT’s secretary and chair of the P3 board. The court’s decision blocked further action to impose tolls on nine state bridges.

Under the order, the PennDOT/P3 Bridge Initiative is prohibited from:

In a 46-page decision, Ceisler sided with Cumberland County; the townships of East Pennsboro, Lower Allen and West Hanover; and the boroughs of Camp Hill, Wormleysburg, Lemoyne, and New Cumberland in their lawsuit (petition for review) challenging the state’s Major Bridge P3 initiative to use public-private partnerships to repair/rebuild major bridges there below, including the Interstate 83 John Harris Memorial Bridge.

The municipalities are located around the I-83 Bridge, one of nine bridges designated by the Pennsylvania Department of Transportation for toll-funded renovation. They argued that PennDOT and P3 officials had no authority to approve the Bridge P3 initiative since it was not a transportation project because no bridge was specified.

“The council is not authorized to approve a generic statewide ‘initiative’ or concept as it has,” the judge concluded. She found he acted in violation of Law 88 of 2012 authorizing the Commonwealth of Pennsylvania and other public entities to form public-private partnerships to operate, maintain and finance transportation-related projects.

She found that this lack of identification of the bridge led to two other violations of Law 88: failing to consult with those affected by the P3 bridge project “since it essentially affected all people throughout the state” and being unable to determine whether the initiative was in the best interest of the state because officials did not understand its scope or content when approving the PPP.

In addition to “these serious questions of law,” Ceisler wrote that the facts of the case “significantly compound” the court’s concerns.

“The board essentially approved a massive, multi-billion dollar infrastructure initiative on an admittedly meager package, consisting of a four-page DOT recommendation, minimal presentation and discussion, and without understanding which pieces of public infrastructure, or how much, the initiative would affect,” she said.

The preliminary request
The injunction is GRANTED, and the Defendants are hereby DIRECTED to take
any other action regarding the Major Bridges P3 Initiative (the Initiative). Big victory in stopping tolls today! #stopthetolls

Asked by Transport Topics to comment on the decision, Alexis Campbell, press secretary for PennDOT, said, “We are reviewing the opinion.”

Rebecca Oyler, president and CEO of the Pennsylvania Motor Truck Association, supported the judge’s decision in a May 18 statement.

“From the day the initiative was announced in November 2020, the PMTA has pointed out that the agency has failed to follow the basic steps not only required by law, but also expected of any government action – communicate before d ‘act,” Oyler noted. “If they had contacted the Pennsylvania trucking industry, they would have heard that the consequences of the toll would be catastrophic. With diesel prices already at record highs, now is the worst possible time to add more than $5,000 per truck per year for trucking companies and other small businesses. These are costs that are ultimately passed on to consumers.

She said that while the PMTA is “pleased to know that no additional funds for driver’s licenses, 40% of which comes from trucks, will be spent on this clear agency, we wonder how many bridges could have been built with the money that PennDOT has already spent. on the initiative of major bridges in PPP.

The PMTA filed an amicus brief in a similar ongoing lawsuit challenging another proposed Interstate 79 bridge toll in which a hearing was held May 18 in Pittsburgh. Oyler said she hopes the court will order a permanent injunction and that the same arguments apply to both cases.

Rep. Jason Ortitay (R) also supports the fight against the I-79 bridge toll. It noted in a statement, “This injunction is particularly significant because PennDOT said at a hearing in the Cumberland County case last month that it planned to enforce a contract with the foreign company it had chosen for the work. This contract would earn the company millions of dollars even if the project were canceled due to a court ruling. PennDOT has shown that it will speed up the process and spend taxpayers’ money recklessly without reason.

Ortitay, whose district includes communities around the I-79 bridge, urged PennDOT “not to waste more taxpayer dollars appealing this decision” but “to admit they were wrong and come to the table to dialogue, and not to govern as a dictator”.