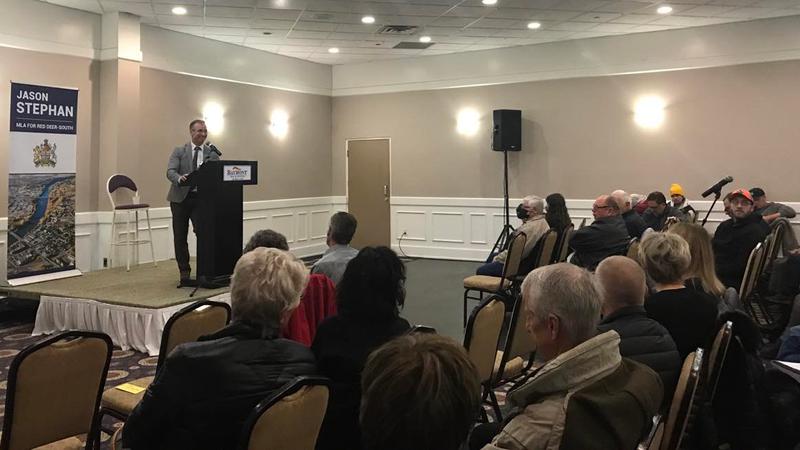 Stephan encouraged all Tories to participate, saying he thought the party would benefit from seeing a vote that truly represents rank-and-file Tories.

Some attendees expressed dissatisfaction with the $100 registration fee to attend the special general meeting where the vote will take place — at the Cambridge Hotel. The price increases to $150 after March 19.

There was also frustration expressed with an apparent lack of response to emails or calls to the PCU, including non-receipt of membership cards after payment, as well as the inconsistency of Premier Jason Kenney on pandemic measures.

Stephan highlighted the impact of Alberta’s insufficient number of critical care beds on the pandemic response, saying the province has less than 50% of the lowest number of critical care beds of any US state. He said the recently announced $1.8 billion investment in Red Deer Regional Hospital will be “transformative” to having positive “health” (health outcomes) in the city.

Adding that Albertans need to “watch AHS,” he received an affirmative reaction from the crowd, then pledged to push AHS to use the funding as soon as possible so needed hospital services can be put in place.

Stephan emphasized his desire for a public inquiry into the impacts that COVID-19 restrictions and other measures have had on Albertans.

Stephan also spoke about the 75-bed addiction recovery community being built in the north end of town and the misconceptions some might have about it.

“It’s a dry place. This is where individuals don’t live in their addiction,” he said, crying while sharing his experience of visiting a similar site. “What I found so gratifying when I went was that the best support for people with addictions was the other people who were on this journey together.”

Hoping that the site and the future permanent shelter will bring some positivity, he described an “exodus” of downtown businesses due to the current situation, which includes the overdose prevention (OPS) site located near the temporary shelter. He said he would like to see the OPS phased out.

One participant expressed support that the OPS has seen less needle debris and even “less dead bodies” near the North Bridge since the site opened.

Another resident built on his past work in the homeless and drug addict community in Ottawa, where services were gradually dispersed outside the downtown core in an effort to revitalize the neighborhood and make it whole again ” livable “.

Among other topics, Stephan shared his excitement for Red Deer Polytechnic’s new Bachelor of Business and Education programs.