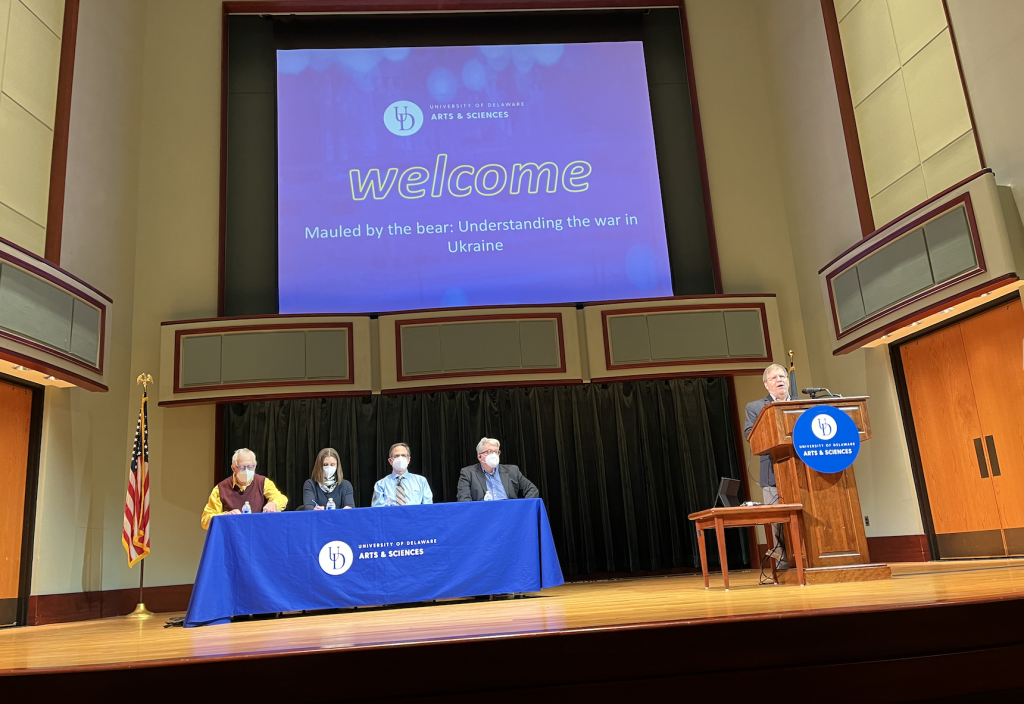 On Monday, February 28, the university organized a panel discussion on the Russian invasion of Ukraine. The event, titled “Mauled by the Bear: Understanding the War in Ukraine”, was announcement three days after the widely publicized start of what the university itself calls “Europe’s greatest war since 1945”.

“History happens, basically, events change,” Green said. “As a professor of the history of international relations, I can tell you so far that February 2022…could rival the earth-shattering changes of 1989 and 1999, when the Cold War itself ended.”

The first panelist to speak was Stuart Kaufman, a professor of political science and international relations at the university and former director of the Office of Russian, Ukrainian and Eurasian Affairs at the White House. A subsection of the National Security Council, Kaufman’s department advised former President Bill Clinton on policies regarding Russia, Ukraine and other countries formed from remnants of the Soviet Union.

Kaufman discussed some possible motives for the recent actions of Vladimir Putin, President of Russia.

“The first explanation is that Putin is a rational actor,” Kaufman said. “From his point of view, the central question is the [North Atlantic Treaty Organization] the war, which is a process that has been going on for almost three decades.

The North Atlantic Treaty Organization (NATO) was founded in 1949 by the United States to form a coalition against the Soviet Union after The Second World War. When a member country is attacked, all members are required to defend it.

Ukraine has been trying to join NATO since the 1990s to ensure its own protection against future Russian invasions and has been promised future membership in 2008. However, Russia demanded that Ukraine be prevented from joining NATO.

“The other type of threat that Putin worries about is internal revolution,” Kaufman said. “He observed many cases of autocrats in neighboring former Soviet republics – Ukraine twice, Kyrgyzstan, Georgia – being overthrown by the people as a former KGB agent.”

However, Kaufman also pointed out that Putin might just be a “thug” or “just plain crazy.”

“It sounds simplistic, but that doesn’t mean it’s wrong,” Kaufman said. “So he’s trying to use war as a way to challenge and intimidate the West, acting like a thug, like a tyrant.”

The second panelist to speak was Holly Myers, assistant professor of Russian in the Department of Language, Literatures and Cultures. She addressed Putin’s recent speeches, which attempt to justify the invasion based on the perceived erasure of Russian language and culture in Ukraine.

Putin also referred to legendary historical figures, such as Oleg the Prophet and Vladimir the Great, who are familiar to Russians and Ukrainians. Oleg the Prophet was famous for consolidating the Eastern Slavs (Russia, Ukraine, and Belarus) into one united kingdom, moving the capital from Novgorod north to kyiv, now the capital of Ukraine. Vladimir the Great, who held the title of Grand Prince of kyiv, centuries later converted the Slavs to Orthodox Christianity.

“It may seem like some kind of obscure reference to us, but it’s something that school children studied in Russia as early as sixth grade and then came back throughout their years in school,” Myers said. “So it’s a reference that would be instantly familiar and resonate with the Russian audience it’s aimed at.”

The third panelist to speak was David Shearer, a history professor specializing in 20th-century Soviet and European history. He discussed the rapid change in Putin’s behavior as he tries to maintain his power in the face of an unforeseen backlash from Ukraine and the West.

“Until last Monday … he acted primarily as his role as a calculating strategist, pursuing Russia’s interests, against perceived threats to Russia, and in particular from NATO,” Shearer said. “Then came his speech last Monday night; this rambling, feverish history lesson about why Ukraine never really existed as a country.

In his speech on Monday, February 21, Putin asserted that the notion of Ukrainian statehood stems from autonomy which is “by mistakegiven to Ukraine after the 1917 revolution.

“Over the years, Putin has based his legitimacy and popularity on his ability to create economic and social stability in Russia,” Shearer said. “That was the key to his power, which is now gone, because the Russians see before their very eyes in hours, days, the staggering and really almost unbelievable implosion of their economy.”

The final panelist was Polly Zavadivker, assistant professor of history and director of the Frank and Yetta Chaiken Center for Jewish Studies. She addressed the false narrative promoted by Putin that the Ukrainian government is run by Nazis intent on committing genocide.

Regarding the claim of Nazism in the Ukrainian government, Zavadivkir pointed out that from 1941 to 1945 millions of Ukrainians died fighting the German occupation. Ukrainian President Volodymyr Zelenskyy is also the grandson of Holocaust victims.

“It’s hard to think of anything darker than invading a democracy with a Jewish leader by the name of fighting the Nazis,” Zavadivker said. “When a political leader invokes the genocide and the Nazis like Putin did, he mocks people who actually care about history and insults those who survived and remember it. The mockery of the Holocaust is so shocking that people don’t want to believe it’s happening, but it’s happening right now.

As for what happens next, all four panelists expressed pessimistic views.

“[Russia] suffered some setbacks, but the fact remains that the Ukrainians are outnumbered, overwhelmed, Kyiv is surrounded, their capital,” Kaufman said. “And I think it’s only a matter of time before they lose the conventional war, before that happens there’s probably going to be some urban fighting, which is probably going to lead to massive civilian casualties, so prepare yourselves.”

The event ended with a question and answer period, during which many students and guests also expressed their concerns about the future of the conflict.

“Long term, I think things can’t go well,” Shearer said. “The title of our panel is ‘Mauled by the Bear’, but I’m still not sure who, in the end, is going to be mauled.”