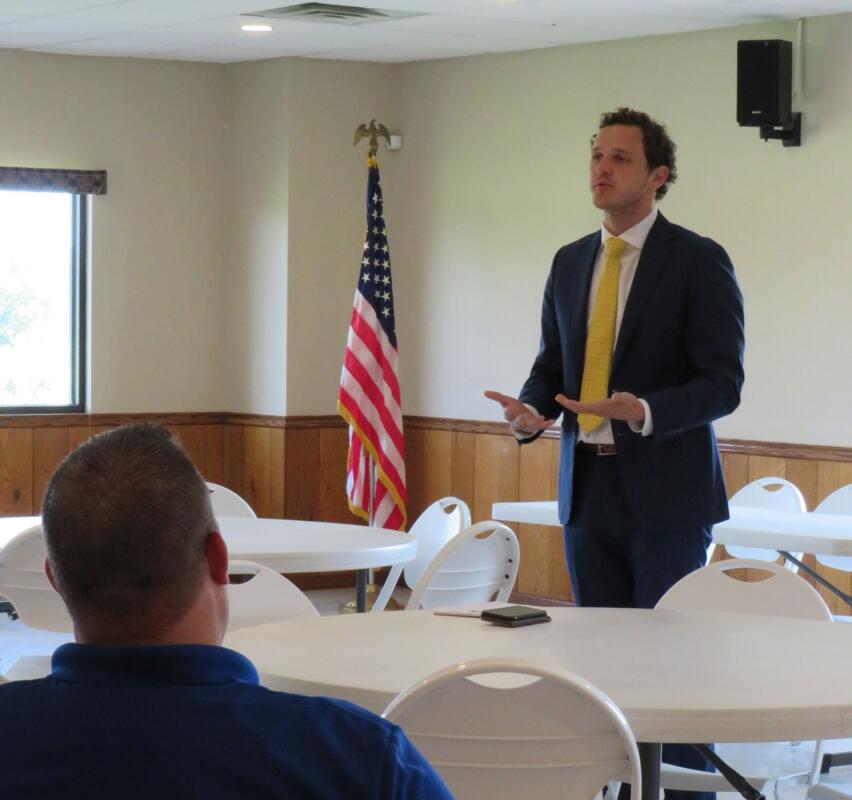 MT. JOKING – State Representative Jeff Shipley, campaigning in the new District 87, shared about himself and his political ideals, as well as participated in conversations on hot topics about family unity and gun control at fire at Mt. Pleasant Noon Rotary on Wednesday.

While many of Shipley’s talking points were about Fairfield and Jefferson County, he had some nice things to say about Mt. Pleasant as part of the new district he wants to represent.

“I love being in Mt. Pleasant,” he said. “There are a lot of people in Fairfield who would like to have the things that Mt. Pleasant has. Whether it’s a thriving business district or a school board that takes parents’ concerns very, very seriously, Mt. Pleasant has a lot to be thankful for.

Shipley took the opportunity with Noon Rotary to make his candidacy clear.

“Protecting freedom is the great vision of the image that if you are a human being and you are lucky enough to be between the Missouri River and the Mississippi River, your life and your freedom, your happiness will be protected, honored and honey here,” he said.

“I believe human beings are meant to be free,” Shipley said. “I believe that God wants us to live in freedom, prosperity and happiness to pass on these blessings to the next generation. It is the government’s responsibility to ensure that no one’s liberty interferes with another person’s health, liberty, or happiness.

As a lawmaker, Shipley believes, “We want to craft laws that create that stability in society.”

Regarding his campaign, he would say that the main goal is to protect freedom and real health solutions, including hospital capacity and the mental health of young people.

“Our primary legislative focus is real health solutions,” he said.

He went on to describe the “flashing red lights” he sees in the community that are alarming.

“We’ve seen a lot of these warning signs in the Fairfield community,” Shipley said.

He spoke of a situation where a young man recently went to jail for supplying the gun that killed his friend as teenagers participated in increasingly risky behavior like Russian roulette.

This survey asks sixth, eighth and 11th graders about general mental health and the presence of suicidal ideation over the past twelve months.

More than 3,741 of these students admitted to having had suicidal thoughts in the past 12 months.

Worse still, 2,173 of those who had thought about suicide made unsuccessful suicide attempts, with about 25% of them having to see a doctor.

These numbers do not include those who died by suicide such as students at WACO, Fairfield and Washington schools.

Shipley noted that responses to COVID-19 were a particular reason for the decline in young people’s mental health.

“Screen time is a huge deal,” he said. “I even struggle with it sometimes and I’m aware of that. We need a real human connection.

Shipley said he understands that these relationships are not privileges given to everyone and that it makes a big difference in the lives of our next generation.

“When I started teaching in the ’60s,” Freeland said, “it was so much easier to reach parents.”

“A lot of people that teachers are trying to reach have to work now,” said Kristi Perry, director of the Mt. Pleasant area chamber of commerce. “My mother didn’t have to work, but now I have to work.”

“I think part of the problem is when the government starts stepping in and doing everything,” Freeland said.

Shipley took over the discussion.

“1950s America where you could graduate from high school and work a few years in a blue-collar job where you could make a down payment on a house that you would be able to own by the time you were in his thirties was the original American Dream, but a lot has changed,” Shipley said.

“Government is all about long-term relationships,” he continued. “I want to invest in those real human relationships.”

Another “flashing red light” Shipley addressed was the shortage of hospital beds.

“We wanted to preserve hospital beds in light of the pandemic,” Shipley said.

He further explained that despite the state’s best efforts, Jefferson County has seen hospital capacity continue to decline.

One of the reasons given by Shipley was the shortage of manpower.

“It’s a complicated problem that didn’t happen overnight,” Shipley said. “I want people to know that we are not going in the right direction. Hospital systems are very, very valuable, so we have a greater responsibility to make sure we respect that system and respect those professionals.

“Hospital services are a blessing that we are not supposed to take for granted,” he said.

During a discussion period, gun control legislation was discussed.

Former Judge Mike Vance asked about Shipley’s vote against sheriffs’ ability to control the carrying of guns in their counties.

“Why has this changed? I didn’t see any checks left there. Vance said.

“The federal background system remains in place,” Shipley said. “I want the federal government to enforce these provisions.”

“The sheriffs in this community knew who shouldn’t and who should have these guns,” Vance replied. “Iowa was really lucky to have that because unless you did something really, really wrong, you could still pass that background check. You could be violent and fight all the time. time while passing this background check.

“A sheriff is going to know that about someone, but you took it right away,” Vance continued.

As Shipley began to reference different opinions in support of his vote, Vance went against him.

The two men spoke at the same time.

“So we have the polls in November and the Second Amendment will be in the polls,” Shipley said. “The proposal is to add strict control amendment lines to the Iowa Constitution, and if you do not believe an individual has the right to keep and bear arms on a strict control basis, I encourage you to vote against it and we will. See what the poll says.

“I will probably vote against it,” Vance said.

“Is that fair enough, though?” Shipley asked. “We should put it to a vote? »

As Shipley ended his time with Rotary, he invited members to contact him and have further discussions.

“These are conversations that we’re going to have to have an hour or two at a time,” he said.

“I believe in the philosophy that there are a lot of important issues that we need to come together on and have discussions about starting one-on-one, in small groups, in a bit larger groups and having discussions across the community,” Shipley said even as he began his presentation of himself.

Currently, Shipley serves as the Iowa House Representative for District 82, but due to redistricting this year, Shipley is running in a different district, including Mt. Pleasant, for re-election.

He sits on the Information Technology, Local Government and Labor Committees.

Shipley grew up in Naperville, Illinois and currently lives in Van Buren County with her two dogs on rented land.

“I didn’t grow up in Iowa, and I’m a little embarrassed to admit that,” Shipley said.

“I had a very privileged background, all things considered. A very standard middle class,” he said. “My father was an engineer. My mother was a retired nurse and very involved in the public school system. We had dinner as a family and went to church on Sunday.

Shipley defined most of his privileges as coming from his upbringing with two parents, strong family relationships, and a strong foundation of faith.

“A lot of problems can start to be solved by getting together as a family and having those strong bonds and strengthening those family bonds regularly, if not every night, at least once a week,” he said.

He holds a degree in political science from the University of Iowa and has previously worked with and without pay in political office.

Shipley’s professional history also includes work at a law firm and with Iowa Wind and Solar.

On a personal note, Shipley took the time to share endearing stories about selling sauerkraut with her friend and participating in community events like Octoberfest.

2022-08-22
Previous Post: Launch of the first electronic platform for people with disabilities
Next Post: LBC is looking for resolutions, candidates for committees, councils