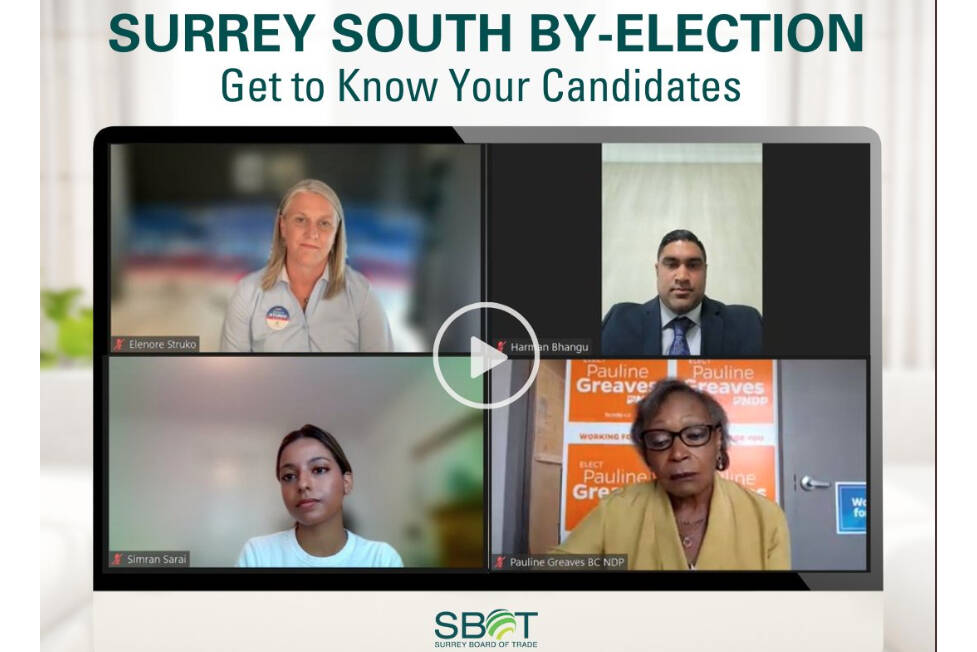 Pauline Greaves, BC NDP MLA candidate for Surrey South, says she’s proud to be part of “this great community” for nearly 30 years.

“But I think it could be even better,” she said at an Aug. 31 candidates’ forum hosted online by the Surrey Board of Trade and moderated by executive director Anita Huberman.

Greaves, an instructor at Langara College’s School of Business, said people in Surrey South “have been waiting a long time for the healthcare they need, close to home”, while being stuck in “long traffic delays”. and paying tolls for crossing the river, before 2017 – which is why she wants to push for the completion of projects such as a new hospital in Cloverdale and the replacement of the Massey Tunnel.

Meanwhile, BC Liberal candidate Elenore Sturko said it was partly her experience working as a police officer that inspired her to embark on her quest for public office.

“I have seen with my own eyes in homes here in Surrey how the opioid crisis has affected individuals, how untreated mental health (problems) and addictions are taking their toll here in Surrey – I want to benefit from my experience and be the voice of South Surrey and people across the province.

Sarai, a political science and environmental management student at SFU, said she was running because “we’re running out of time to act on issues like the climate crisis, affordability and health care.” .

Bhangu said he decided to get into racing because he has “a young family with kids aged four and two” and because he is a small business owner in “the very industry volatile trucking, (in) which we’ve seen gasoline prices change every week – so we always have to adapt and prepare for the future.

Voters will go to the polls on September 10 to elect an MP in the riding – a seat left vacant when BC Liberal MP Stephanie Cadieux resigned in April to take on a new role as the first director of the accessibility in Canada.

The hour-long meeting – it could not be described as an all-candidates forum (Libertarian BC candidate Jason Bax was absent for undisclosed reasons) – focused on a series of questions posed by Huberman.

They were the ones who revealed the starkest political differences between the candidates – Greaves and Sturko in particular.

In a question about the best way to unite Surrey, for example – Huberman called it “existing like a series of silos” – Sturko and Greaves couldn’t help but shoot the parties of the ‘other.

Sturko said a key part of breaking out of silos and connecting business centers was improving transport between different areas of Surrey.

“It’s disappointing to see that in its second term the NDP has failed to serve, in particular, transport in South Surrey,” she said.

“We are not looking to cancel this hospital project (in Cloverdale) but we would like to have our second hospital – which we are committed to providing to residents – closer to our brand new Skytrain, which is going to be moved along Fraser Highway .”

“After years of the BC Liberals crafting policies forcing (people) to pay more, they left us with a system of unstable social inequality where only the wealthy benefit,” Greaves countered. “What we are working on is working with local governments and businesses to address some of these concerns.

“If the BC Liberals had actually delivered on what they promised, which was to expand the Skytrain, it would have worked by now.”

By contrast, Sarai said she wanted to focus on all levels of government working with each other.

“As a member working in the provincial legislature, I think the most important thing we can do is work with other levels of government,” she said.

“You still have your voter base, but you have to reach across the aisle and reach other voter bases, other voters and voters who might not see things through their eyes right now.

“We need to sit at the table and have constructive conversations and work towards compromises,” he said, noting that Surrey South is a very diverse community with many different issues to balance.

“Lately all I’ve seen is a lot of hateful rhetoric from all sides. We have to put an end to this – we have to work with our municipal governments. »