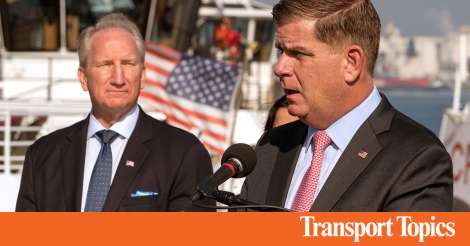 With negotiations set to begin soon between the 22,000-member International Longshore and Warehouse Union and the Pacific Maritime Association, ILWU leaders express confidence that the two sides will reach an agreement – without disruption of work – before the deadline of June 30 for the current expiration of the contract.

“We will get a deal,” ILWU President Willie Adams said April 12. “Everyone should lower their voices and stop all rhetoric. We have been bargaining — the ILWU and our employers — we have been bargaining since the 1930s. There are adults on both sides of the table and it’s called the process.

Adams made the comments during an interview with Port of Los Angeles Executive Director Gene Seroka for Seroka’s monthly report on port activity.

the @PortofLA interviewed #ILWU leadership on work through the #pandemicthe #supply chain crisis and the next #negotiations. Here is the first interview and a good introduction for anyone interested in our 29 West Coast ports. https://t.co/Poc9DFYkmi

The talks are taking place against the backdrop of supply chain challenges, a tight labor market and midterm elections in November.

The Biden administration, and Labor Secretary Marty Walsh in particular, are watching the process closely. Over the past few months, Walsh has visited the ports of Los Angeles, Long Beach, Seattle and Tacoma. He recently told Transport Topics that he was optimistic that a deal could be reached, but said he was ready to travel to the West Coast if either side requested it in the negotiations.

“The one thing, or concern, that I haven’t heard a complaint about in the supply chain is the workers. Nobody complained about the quality of work of the truckers or stevedores,” Walsh said. “I think everyone is aware of the situation we find ourselves in today. But they are very seasoned negotiators on both sides. I am not concerned.

Industry experts and shippers are watching the negotiations closely. Labor and management representatives reassured port executives, shippers and retailers that discussions will remain focused on key economic and workplace issues.

Container volumes continue to set records. On April 12, the Port of Los Angeles reported handling 2,682,034 20ft equivalent units during the first quarter, a 3.5% increase over the volume of 2,592,430 containers in the first quarter of the previous year. . March alone was good for the third best month in the port’s 115-year history. Other ports along the east and west coasts also reported record or near record numbers in the first quarter.

Overseas shipping rates have also skyrocketed. Maersk, the world’s second-largest shipping company, said on Feb. 9 that 2021 was a record year, underpinned by “exceptional market conditions that led to record growth and profitability.”

Shipping rates, which skyrocketed in 2021, have come down but remain high. Drewry’s Global Container Composite Index fell 1.4% in the week of April 7 to a cost of $8,041 to move an equivalent 40ft container from Shanghai to the United States. .

Adams noted that companies have posted record profits during the pandemic, and his group expects some of that money to reach the workers who have kept the ports running.

“We’re talking about a gold rush that happened,” he said. “No one talks about all the money these foreign companies have made. All we offer is our work — we don’t make business decisions. But we are the best workforce on this planet, bar none.

Throughout the pandemic, port leaders regularly praised ILWU workers for staying on the job, especially during the early days and before vaccines were developed. The union said more than 1,700 dockworkers have fallen ill during the pandemic. Last summer, two died.

“We were all so encouraged at the start of COVID, when no one knew what was going to happen, that the ILWU leadership sat down with the employers association and others, including the ports, to work on health and safety measures to make sure we have the best personal protective equipment and we clean machinery and communication devices,” Seroka said.

In November, the Pacific Maritime Association requested a one-year contract extension amid supply chain challenges, but the ILWU rejected the offer and confirmed it wanted to open negotiations on a new contract in the spring of 2022.

“If people look at what we’ve done over the past few years, we’ve collectively negotiated deals to get through COVID,” said ILWU coastal committee member Frank Ponce De Leon. “We made things happen. We kept people safe and we didn’t close any of our ports – all along the west coast.